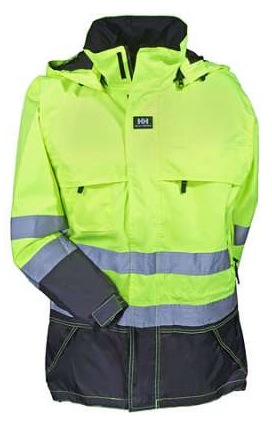 Our friends at ANSI have approved three main classes of clothing regarding visibility: namely, Classes 1, 2, and 3 (surprised?). Actually, there is a class E that’s only for work pants and shorts. When these are worn with Class 2 or 3 garments, they add up to Class 3 coverage.

The higher the class number, the higher the visibility. This is based on the amount of background material (often bright orange, red or green–you want to stand out from your surroundings), the width of the reflective tape, and the photometric performance of the tape (how reflective it is, right?). Except for Class E, all High Visibility clothing must contain 360 degrees of reflective taping around the torso.

A vest cannot be rated Class 3 when worn alone. And while we’re on the subject of vests, ANSI has approved a special category (ANSI 207-2006) here for Emergency Medical Responders, Firemen, Police, and DOT personnel. The amount of hi-vis fluorescent background material required is between the Class 1 and Class 2 standards. Allowed now are Velcro break-away features should the vest get caught on a moving vehicle. These hi-vis safety vests must be large enough to fit over a firefighter’s coat, and be designed with cut-out sides so belt equipment and sidearms can be accessed directly. The standards even allow for additional color-specific markings to differentiate between law enforcement (blue), fire officials (red, what else?), emergency responders (green), and DOT folks (orange).

Class 1 High Visibility Workwear is for people who can put their attention on the traffic around them, and where there is some separation from moving vehicles. Examples would be sidewalk maintenance workers or warehouse workers.

Class 2 High Visibility garments are intended for workers whose tasks are likely to divert their attention from oncoming traffic that may be traveling more than 25 miles per hour. Examples would be crossing guards or survey workers.

Class 3 High Visibility Clothing protection is for workers who face serious hazards and often have high task loads that require attention away from their work. Reflective stripes around arms or legs are usually needed here. Examples would be emergency response workers and roadway construction crews.
Suit upright and be SAFE!